I love this season and what is not to love. You have costumes and sfx makeup, you have gore and horror, and you get to eat a lot of candy.

Today is also the one year aniversary for my facebook fan page.

Even though I am fully booked with finishing my Morrigan costume before the weekend, I just had to do something for this occation.

This is a spur of the moment put together costume, so it is a little hastily executed.

I really liked the first saw movie, and ever since I saw a beauty makeup of the Billy puppet on pinterest I wanted to try it out. 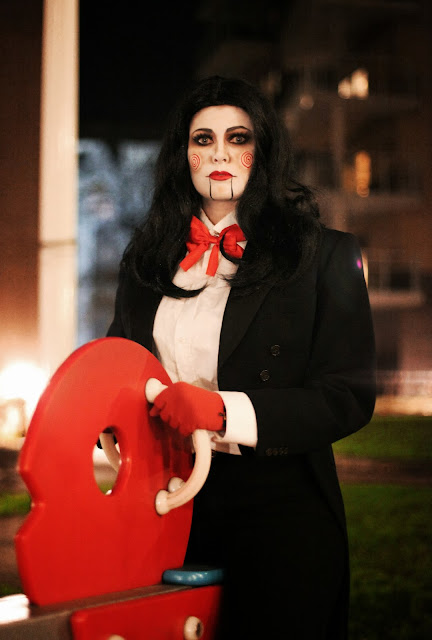 Me sitting in a playground in the middle of the night 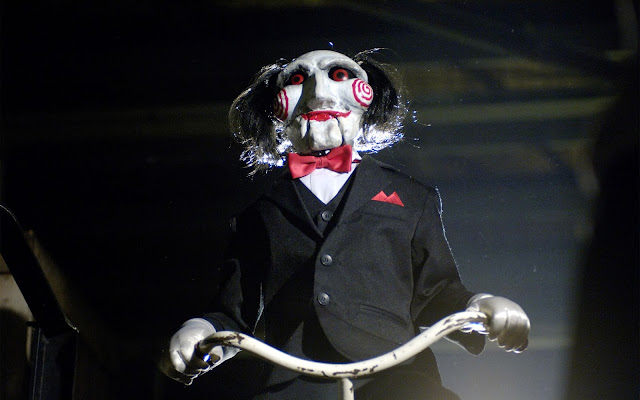 I do not take credit for the idea, but I can show you how I did it.

I started with a plain white cream facepaint. This is difficult to get even. I went with the method of "dabbing" it on with a sponge rather than smearing. First a layer of white, then a layer of powder, then another layer of white. 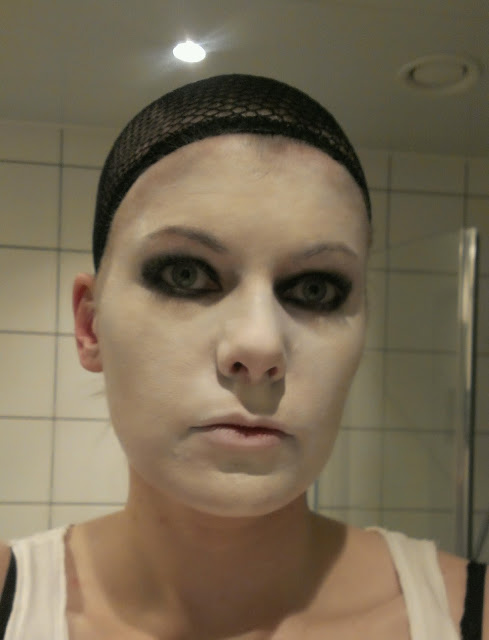 Black eye shadow was added around the eyes. 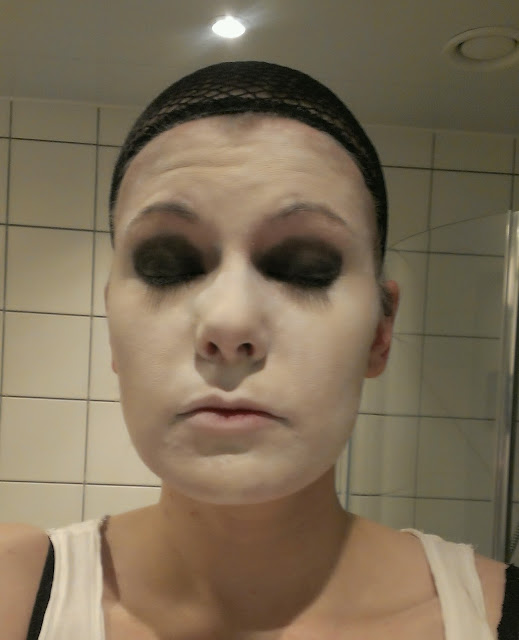 Then more brown eyeshadow around the eyes, along the nose and in circles on the cheeks. As a stencil for the circles I used the cap of my hair spray and a small makeup brush to outline it with brown eye shadow. 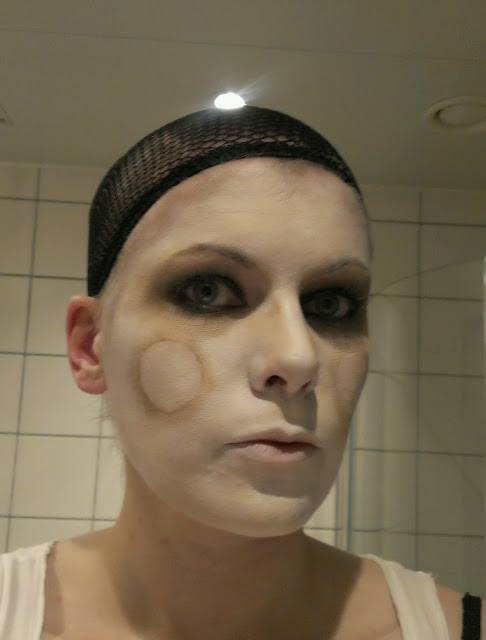 Define the eyebrows and add more black around the eyes. 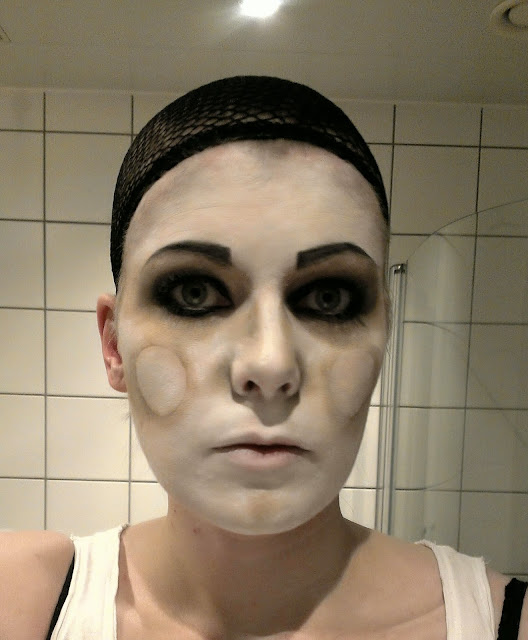 Now the swirlies in the cheeks. I used red acryllic paint mixed with a bit of water and a fine brush to paint it inside the circles on my cheeks. 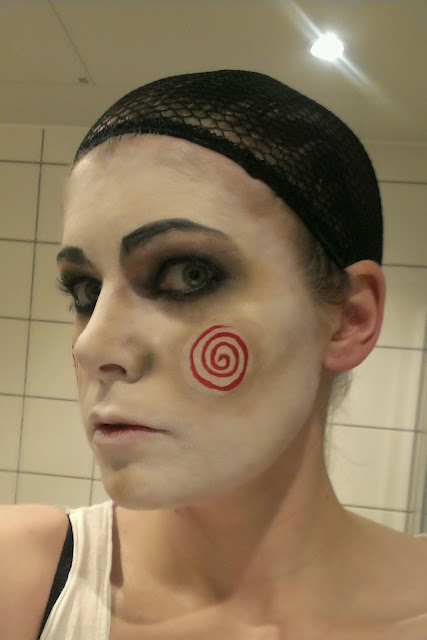 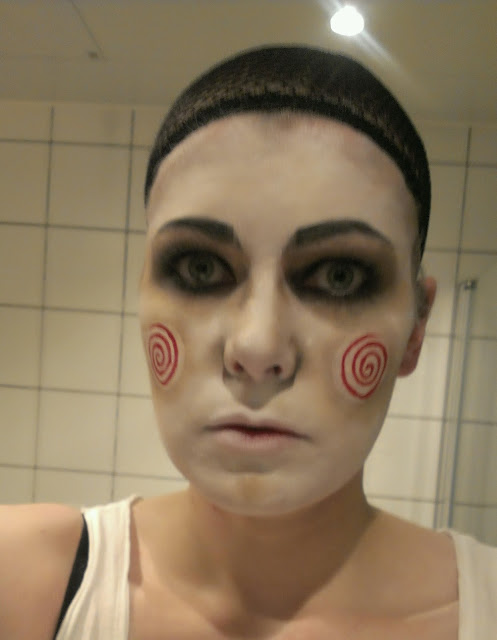 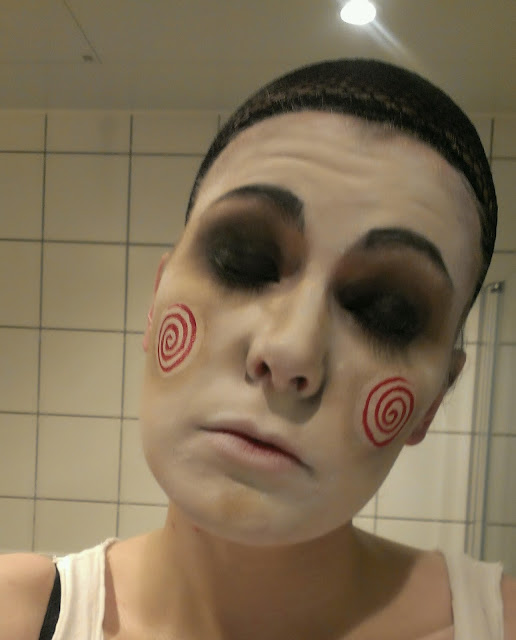 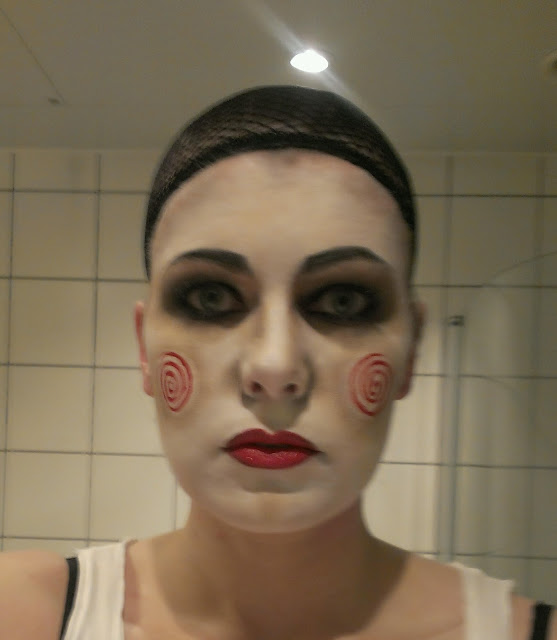 Almost there, doll lashes have been added and the black stripes have been painted on using eyeliner. 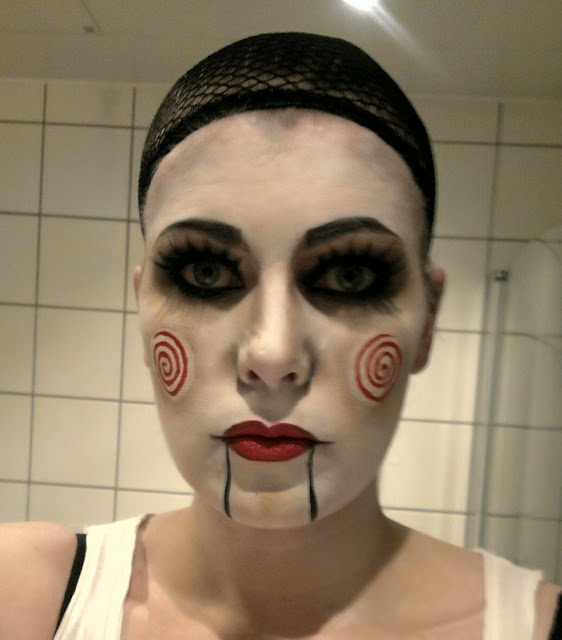 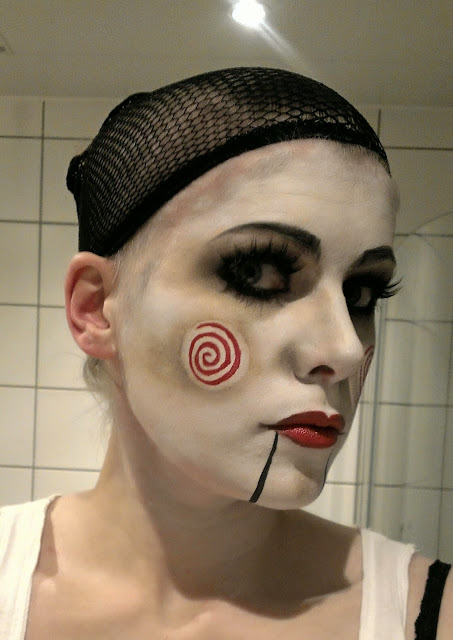 At last I found a (horrible) black wig, borrowed my boyfriends white shirt and used a hair bow at the collar. 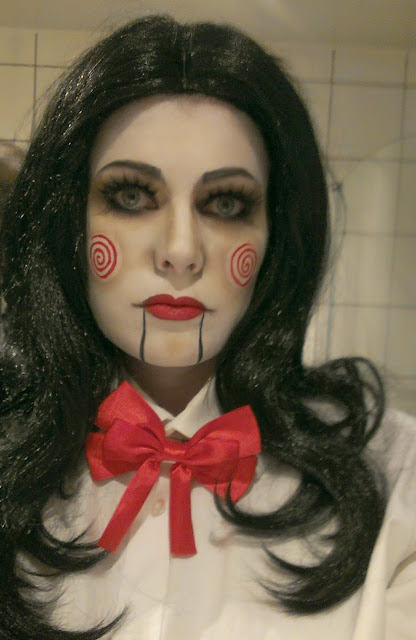 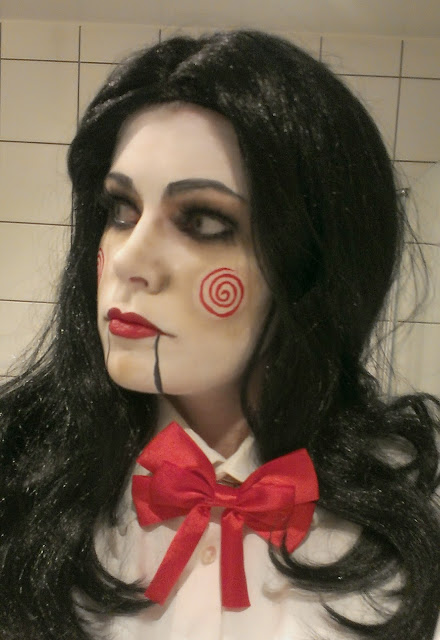 Now let's find a playground or a park! 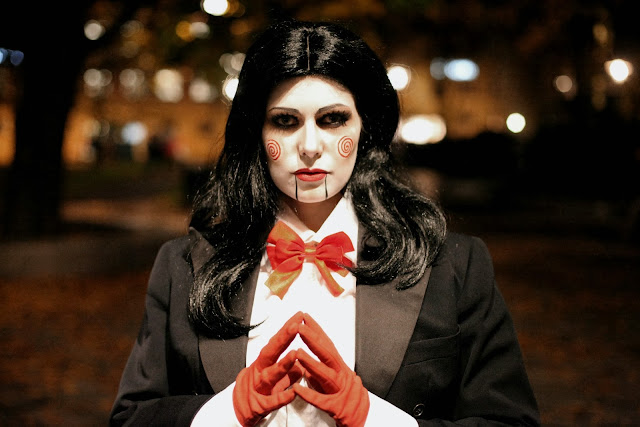 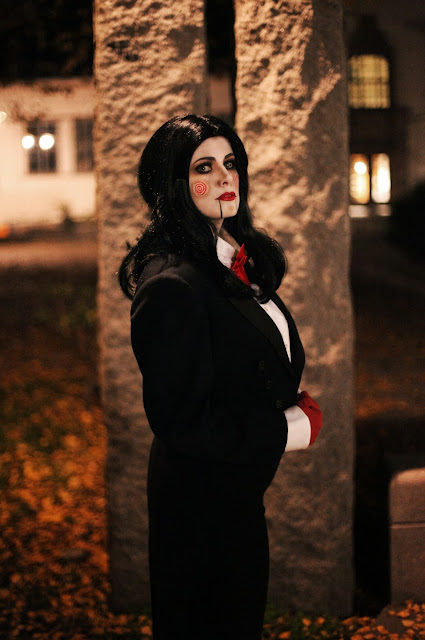 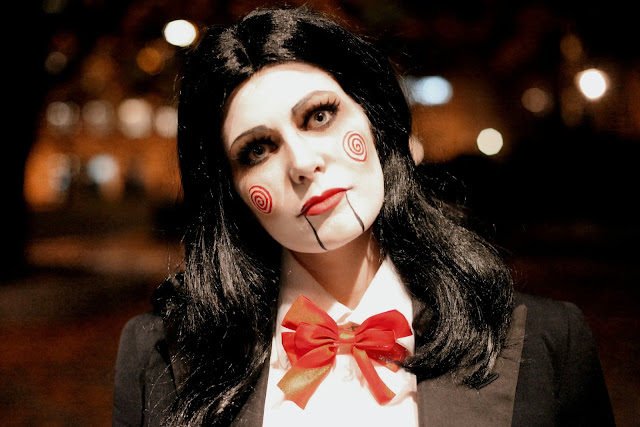 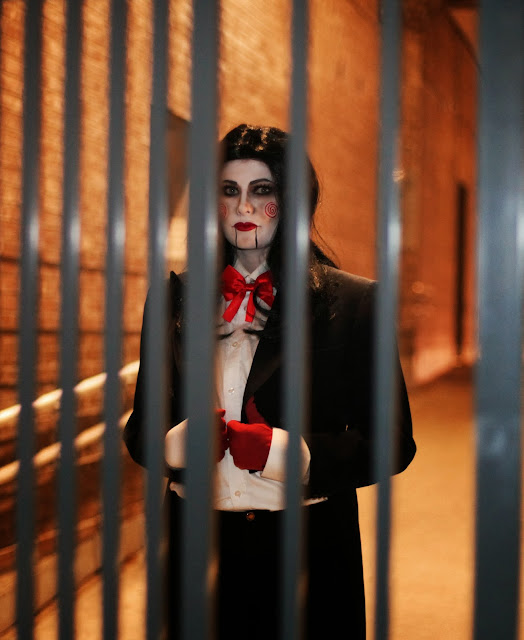 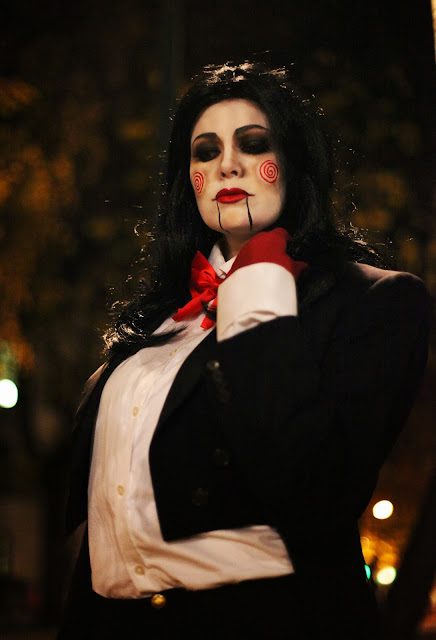 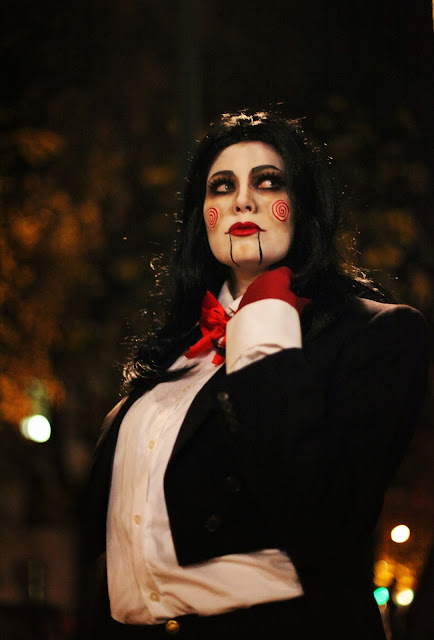 There you have it, this years Halloween makeup. Good thing I have a lot of stuff laying around the house. The tailcoat was actually hand tailored and given to me by my mother who found it at a flea market.