I love Studio Ghibli, but had yet to cosplay from one of the movies. And as I love strong female characters I chose to make San from Princess Mononoke, but a slightly older version. As I started to redesign my version I came over the beautiful art nouveau concept by Hannah Alexander. So I took alot of inspiration from her artwork while still keeping a few of my own ideas. 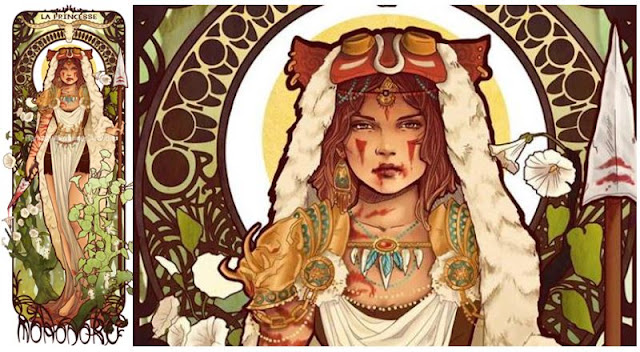 The Mask
In the movie San changes between whole mask to a half mask after getting shot. My choice ended on the half mask. A black worbla and foam base was stretched over a sryrofoam head to create the shape. 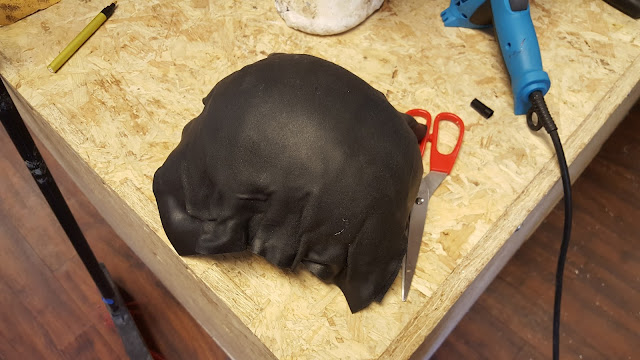 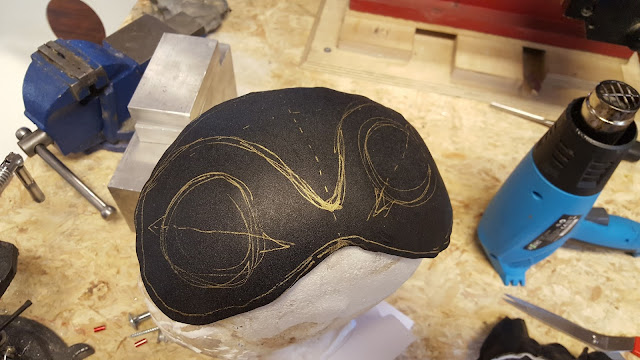 Several details were added using more worbla. And the entire mask was primed with wood glue. The ears were built hollow and out of worbla as well. All pieces were primed and spraypainted red. 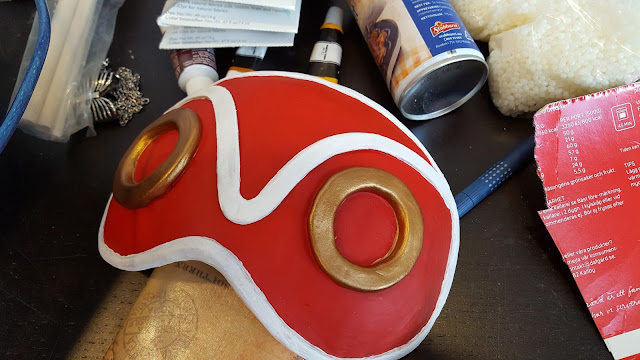 With acrylic paint I added more and more details to make it come to live :) A little airbrush was used as well. 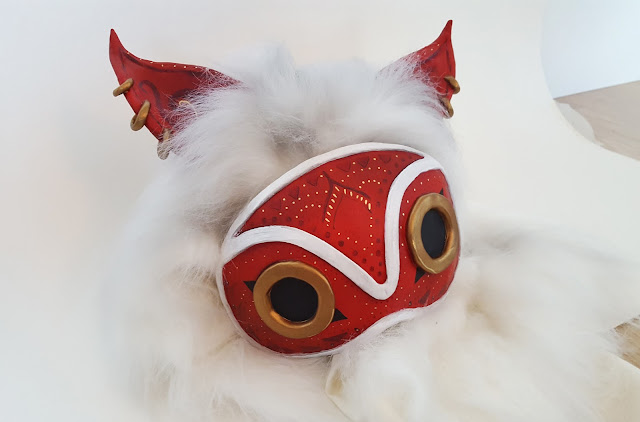 The earrings and detailed paint job was directly inspired from Hannah Alexanders design. 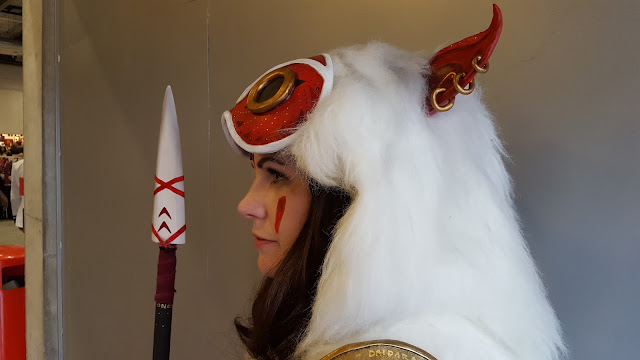 The Hood And cape
San uses a full fur over her shoulders. As I'm quite tall I thought that would make me look a little bulky and square, so I went for a fur hood and a linen cape with fur trimming. I used fun fur for this, as it is cheap and airbrushed it to get a more interesting look.

For the cape I made a wolf emblem on the back. 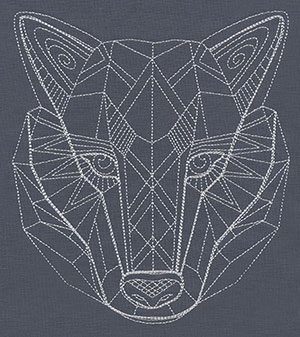 The Appliqué was made from a daker furniture fabric with all the lines added by sewing machine. The double lines were made using a twin needle on my sewing machine. It gave a nice raised 3d effect to the fabric. It is attached to the cape using close zig zag stitch. 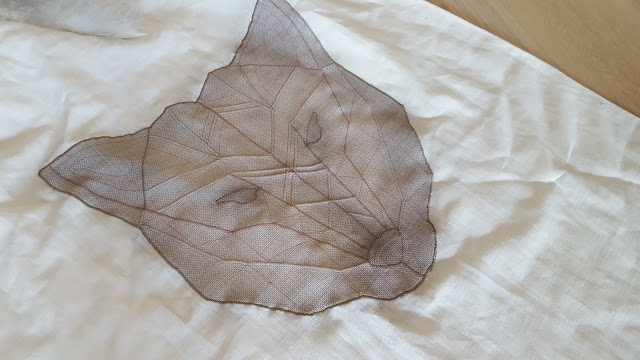 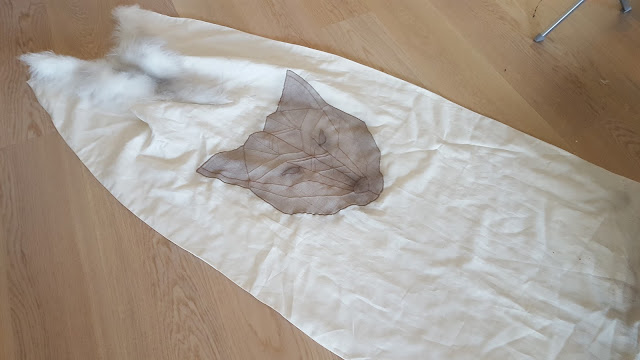 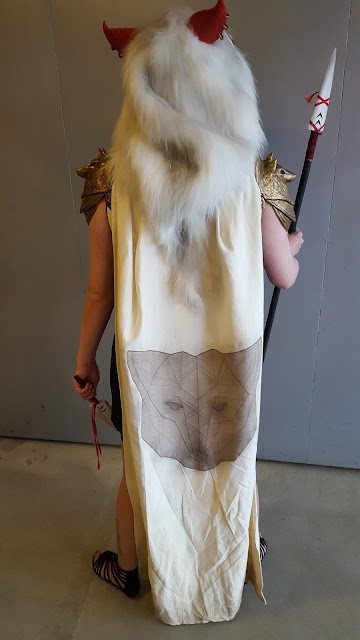 The dresses
The dark blue underdress was sewn in a stretch jersey fabric with a princess cut pattern. 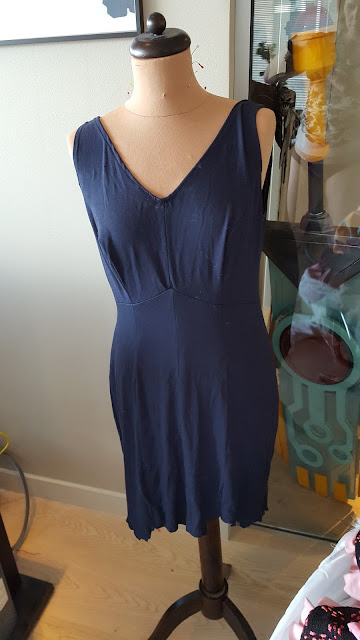 The overlaying white dress are simply two lined pieces of fabric draped to hang from the pauldrons. Leather strips were used as a belt. 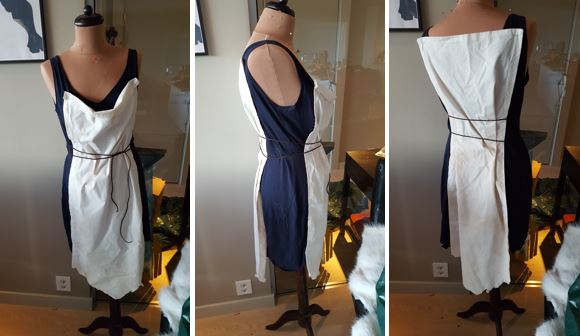 The Pauldrons
The idea of adding pauldring came from Hannah Alexanders design, but I wanted a wolf deaign rather than a boar.

First I sculpted a wolfs head out of clay, then I stretched black worbla over it. I took out most of the clay to reduce weight, but left some in the extremeties (tip of nose and ears). 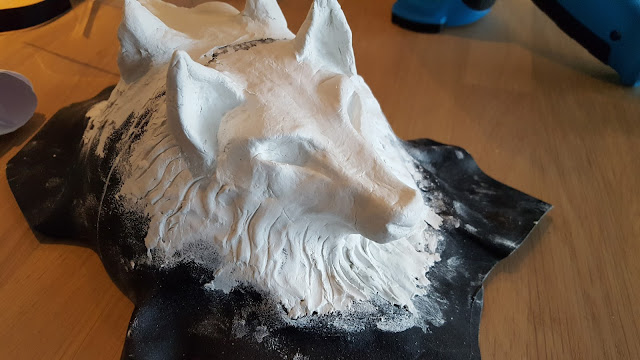 Then I stadily added more layers and details and a gold paint job. 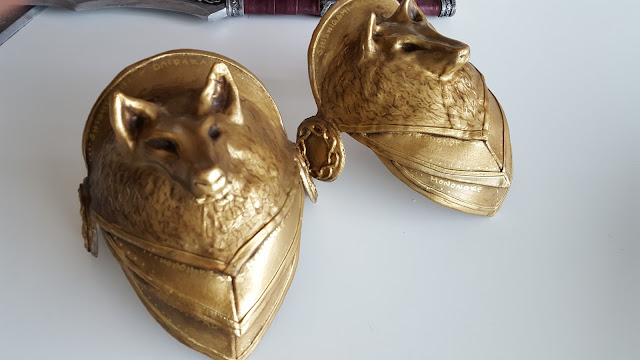 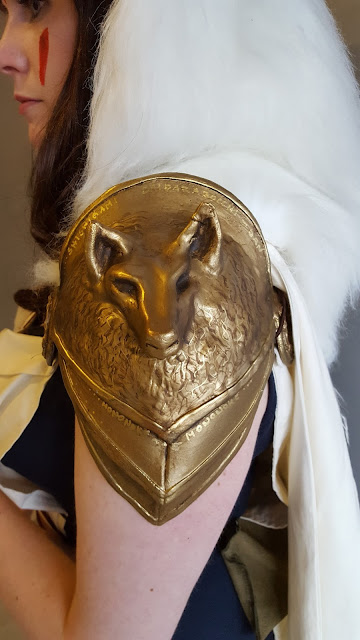 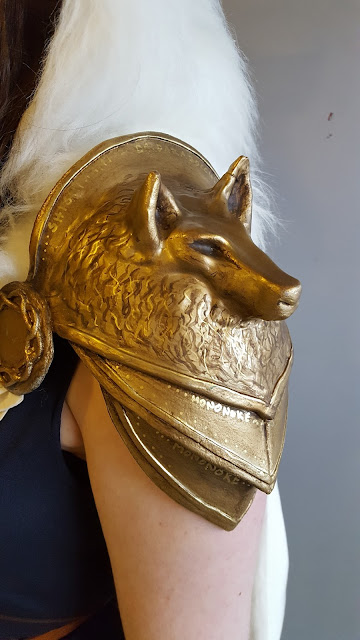 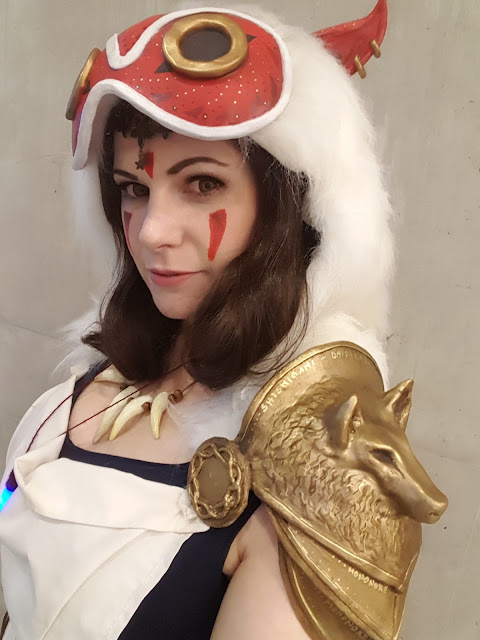 The jewellery
For the necklace I sculpted the teeth out of polymorh and alternated the design with wooden beads. 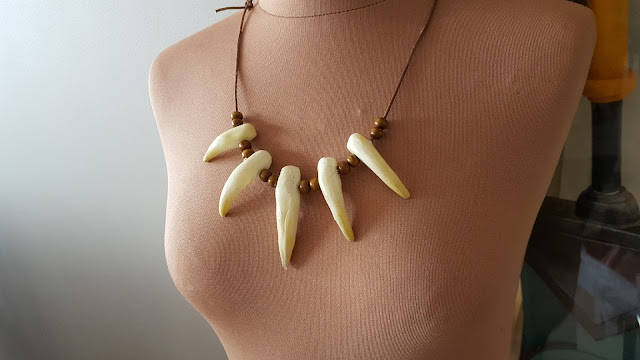 The blue necklace is also made from Polymorph, but I embedded a blue LED and a battery to it, so it would glow. 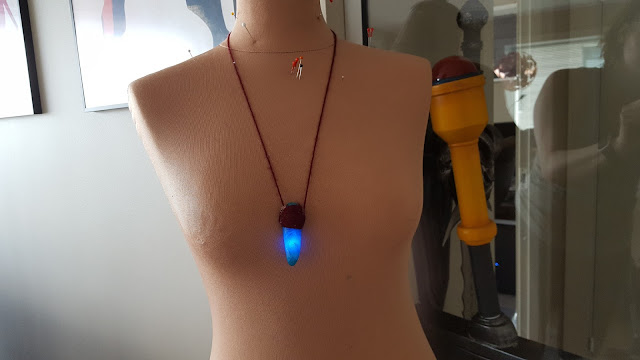 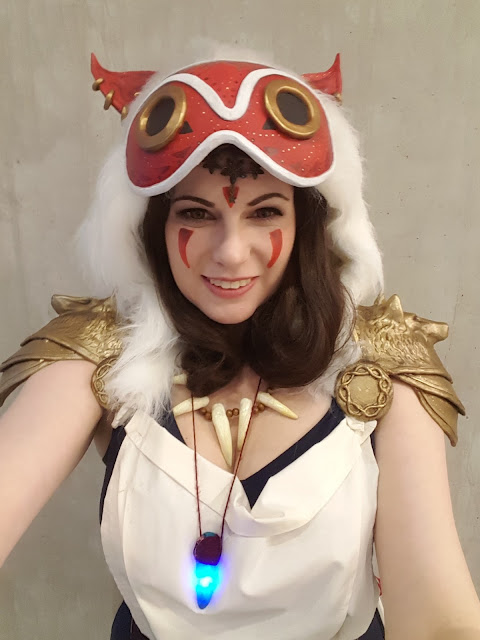 The spear and knife
These were first drawn in vector style and then laser cut. Two layers were glued together and sanded down. 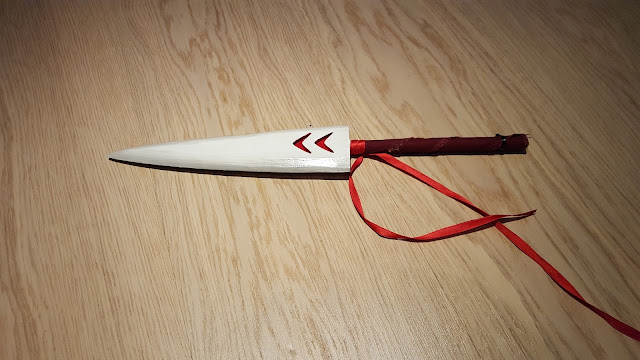 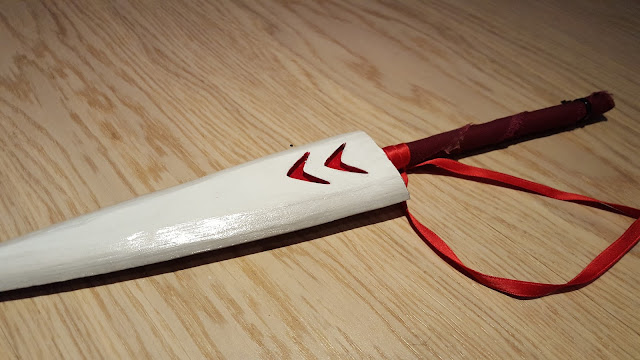 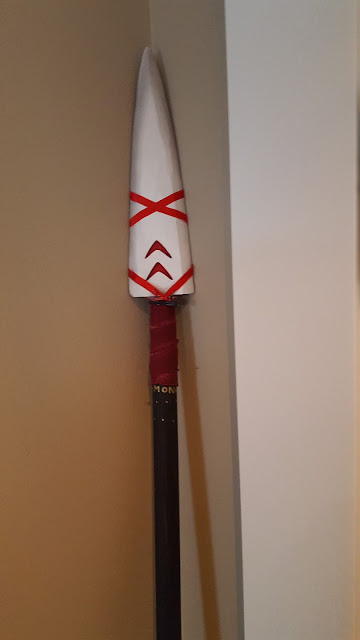 The final look
Conwant Cosplay and Art just released these two stunning photos of me and my sister as the Forest God. 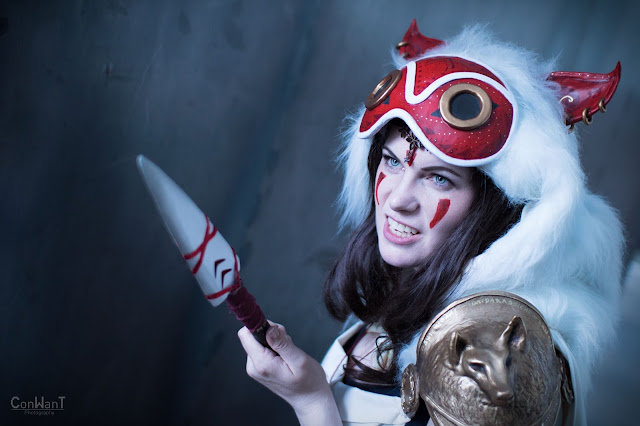 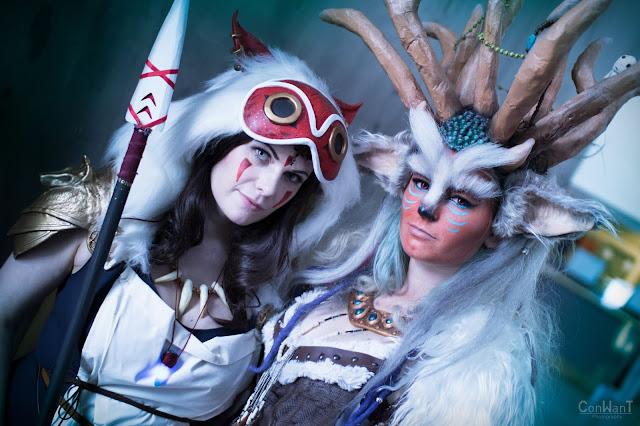