I really liked my first set of hands, but good can be better. So this is how I built my initial hands and this is how they looked. And here is a link to tutorials of all the other parts of the Vi costume. 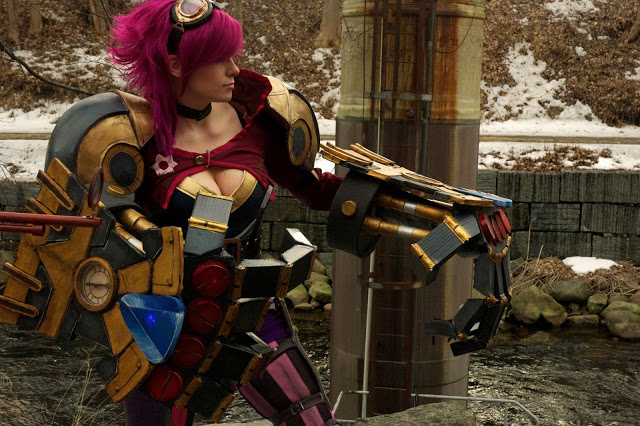 There are several things I wanted to do better
And this is how I solved these issues.

More dimension
In short add more foam, which means everything have to be repainted. I only had to build up on the very top and the lower part of the hand, and to make it a little easier for my self, I covered some of the surfaces with card board. This is because the foam is very porous and it would take some filler to get that smooth surface which again means more weight (I am a puny girl, make it light weight please). 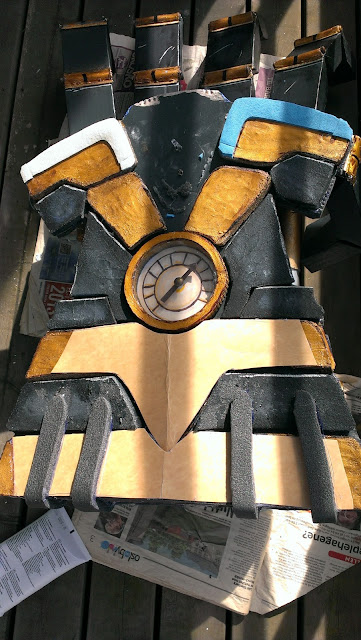 Close ups of what have been added. 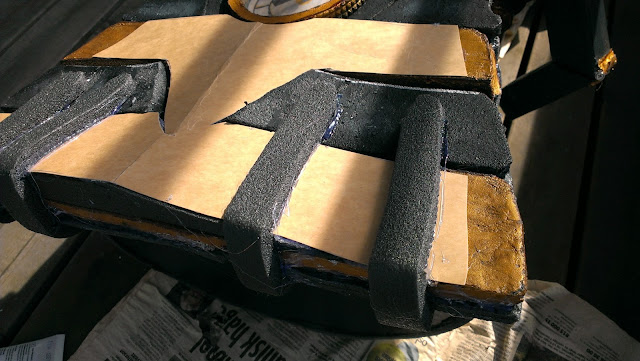 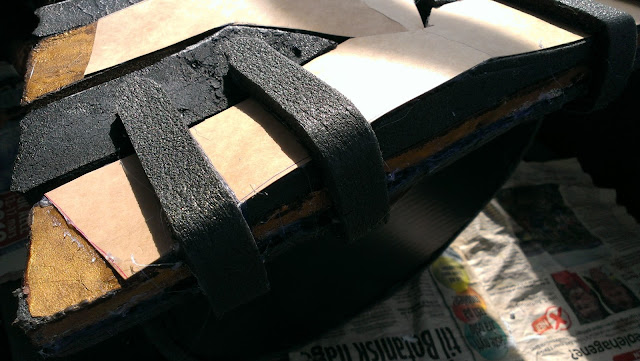 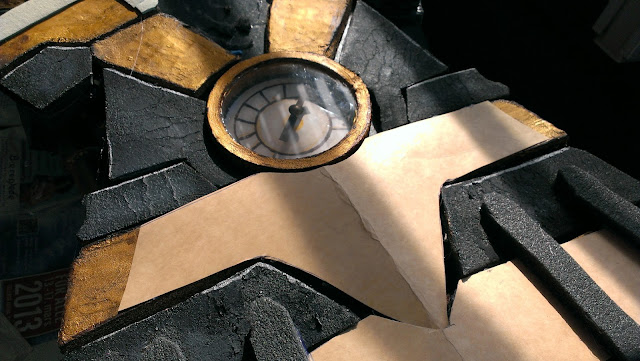 Then I evened out the surface with filler and repainted the body. 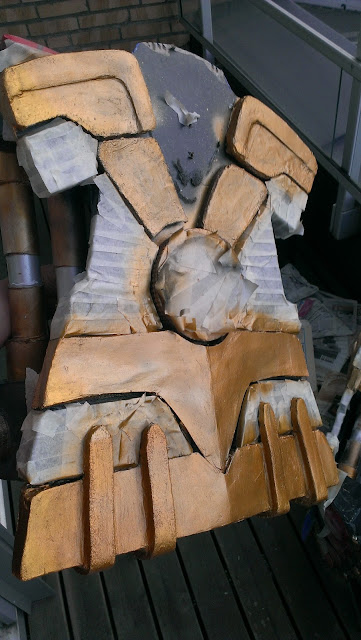 And this is why you should weather and add more than one color. On the left mono chromatic gold, on the right gold, warm brown and dark brown (and still more to come) 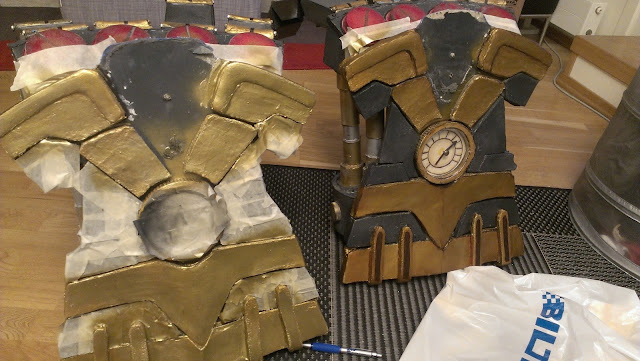 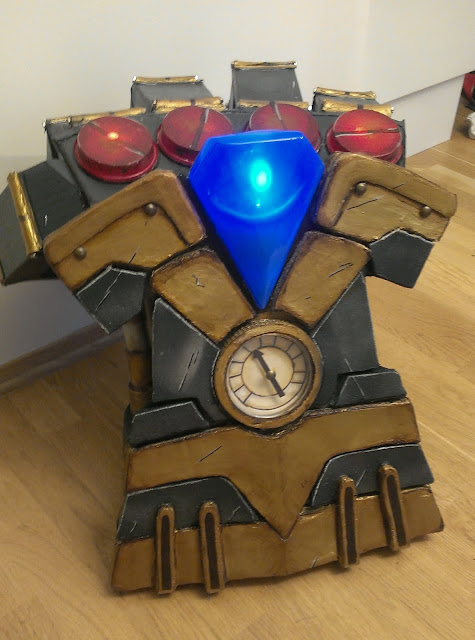 That blue crystal
I made a mold for either vacuum shaping or cast in resin. My first attempt on the resin cast was a failure, and since I finally found a workshop with a thermo vacuum machine this would make a more light weight crystal. (I'm not kidding, every gram counts for me when carrying these).

The crystal was made with paper clay around a tin foil core, sanded down and covered in spray paint (gold was closest apparently). 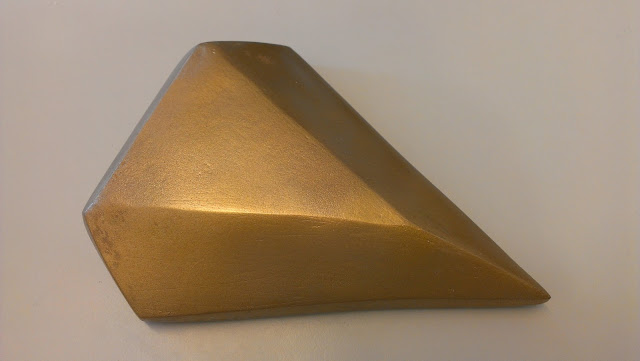 The cast/pull was made from transparent thermo plastics which I spray painted blue on the inside. 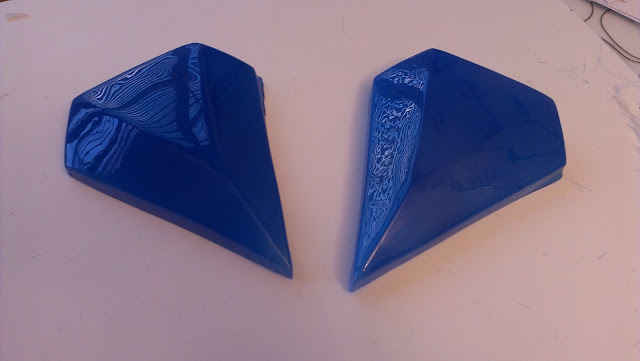 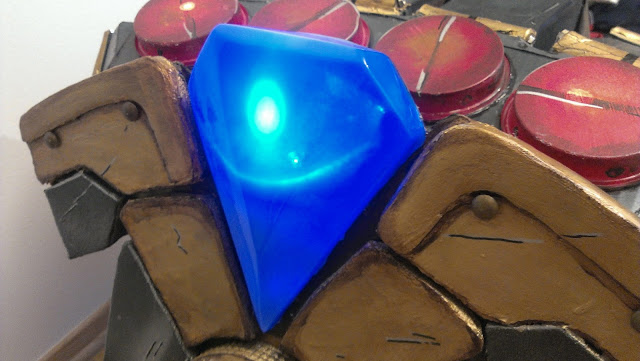 The fingers
The springs I used initially did not create enough tension to flex the fingers, so I added small strips of plastic (from el strips actually) 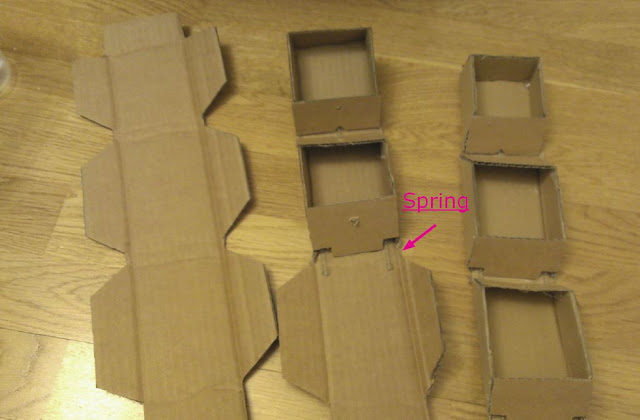 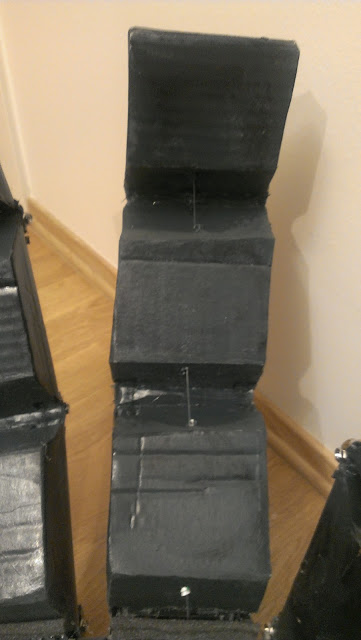 The fishline going through the finger 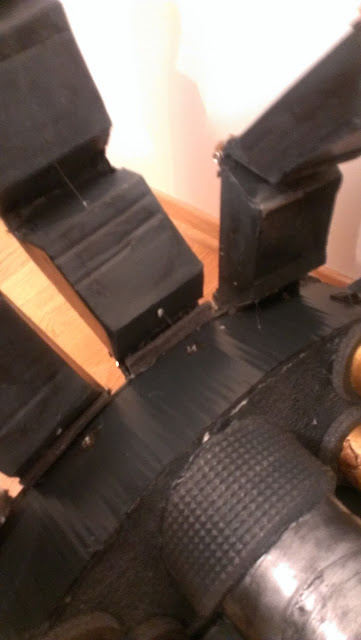 And the fishwire goes into the base and a key chain ring. 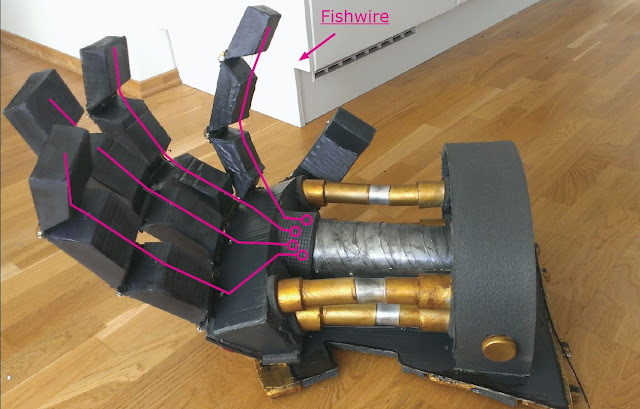 I even filmed and tried to explain better how they work.


Make it steam!
I am a sucker for extra features, it already glowed and moved the fingers, so the next level is making it steam like it does in the animated login video.

Luckily the base of the hands are hollow, so I have room to integrate the steam system. You can see the result in the video of my performance a little further down. Later I will film the gloves close up and how the steam works.

How did I do it you wonder? I started with a smoke detector tester which emits a non toxic gas. 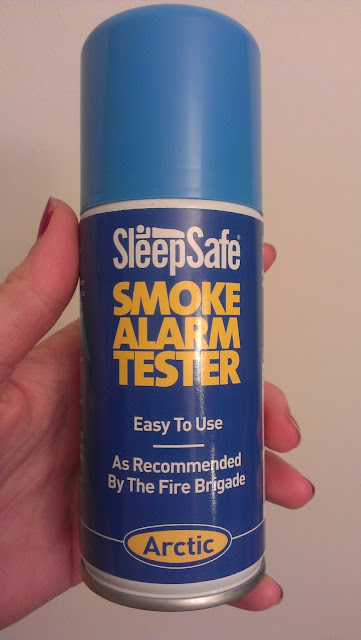 To activate it I used a small model plane servo, a battery pack and a servo tester, because the servo doesn't start spinning unless there is a signal telling the rotor which position it shall stand in. Just hooking the servo to a battery just won't do it (I learned that from trial and error).

Then I just needed to attach the servo to the spray can nozzle, clay and gaffa did it. In the video below you can see how it works before I install it inside the hand. 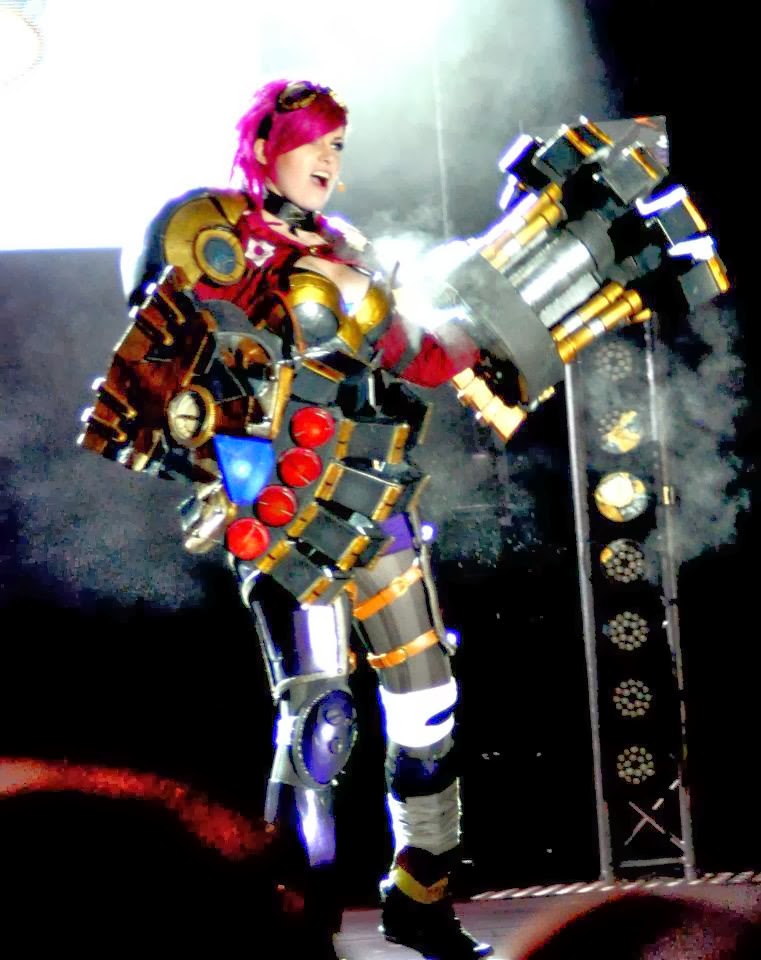 Finished hands
This is how it looks now with integrated steam, lights detailing and the shit. And a video of my performance, steam in action.

And here are a few shots of the upgraded hands 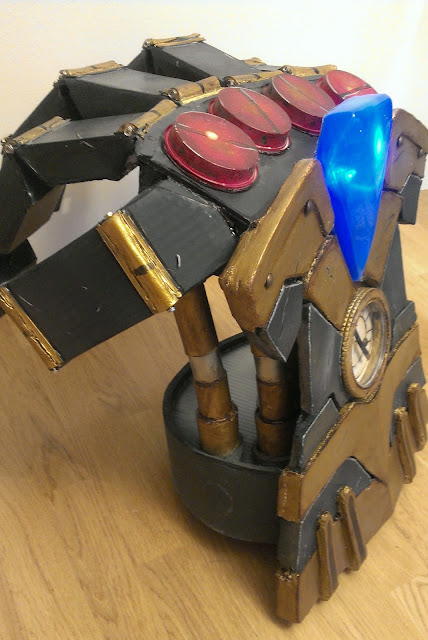 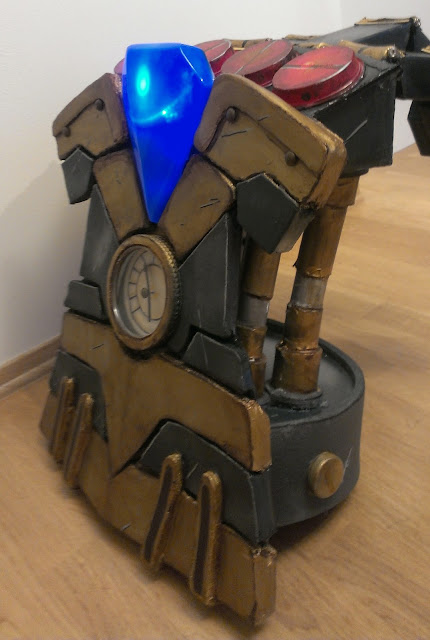 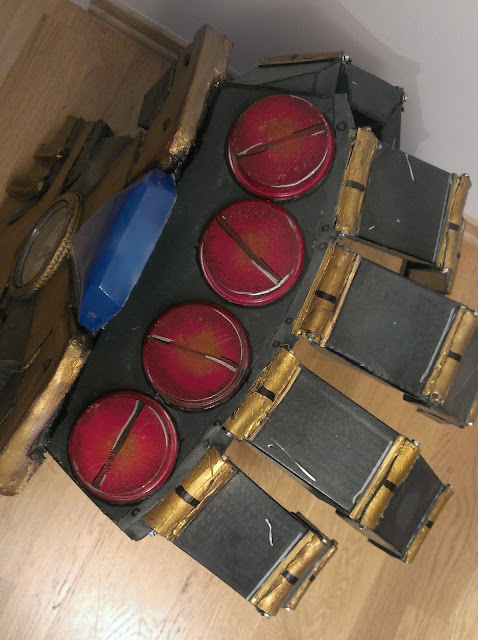 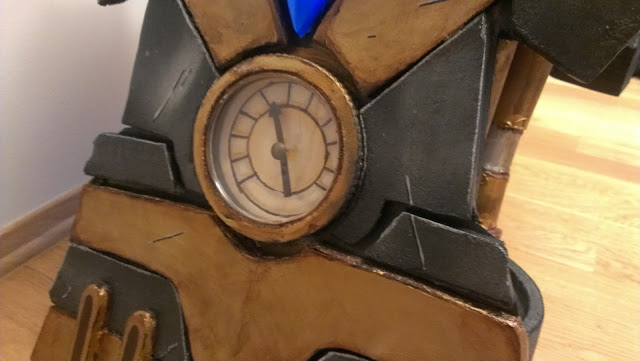 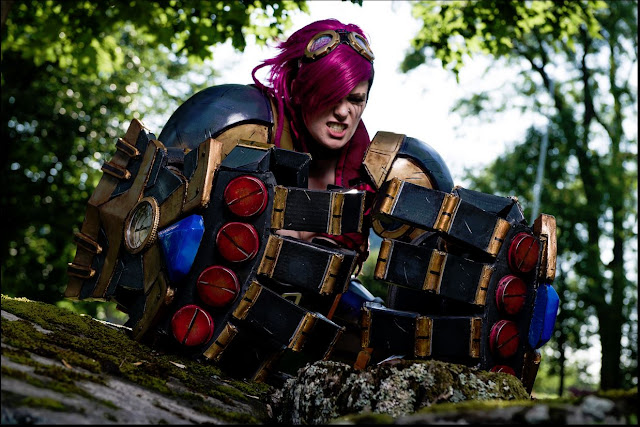